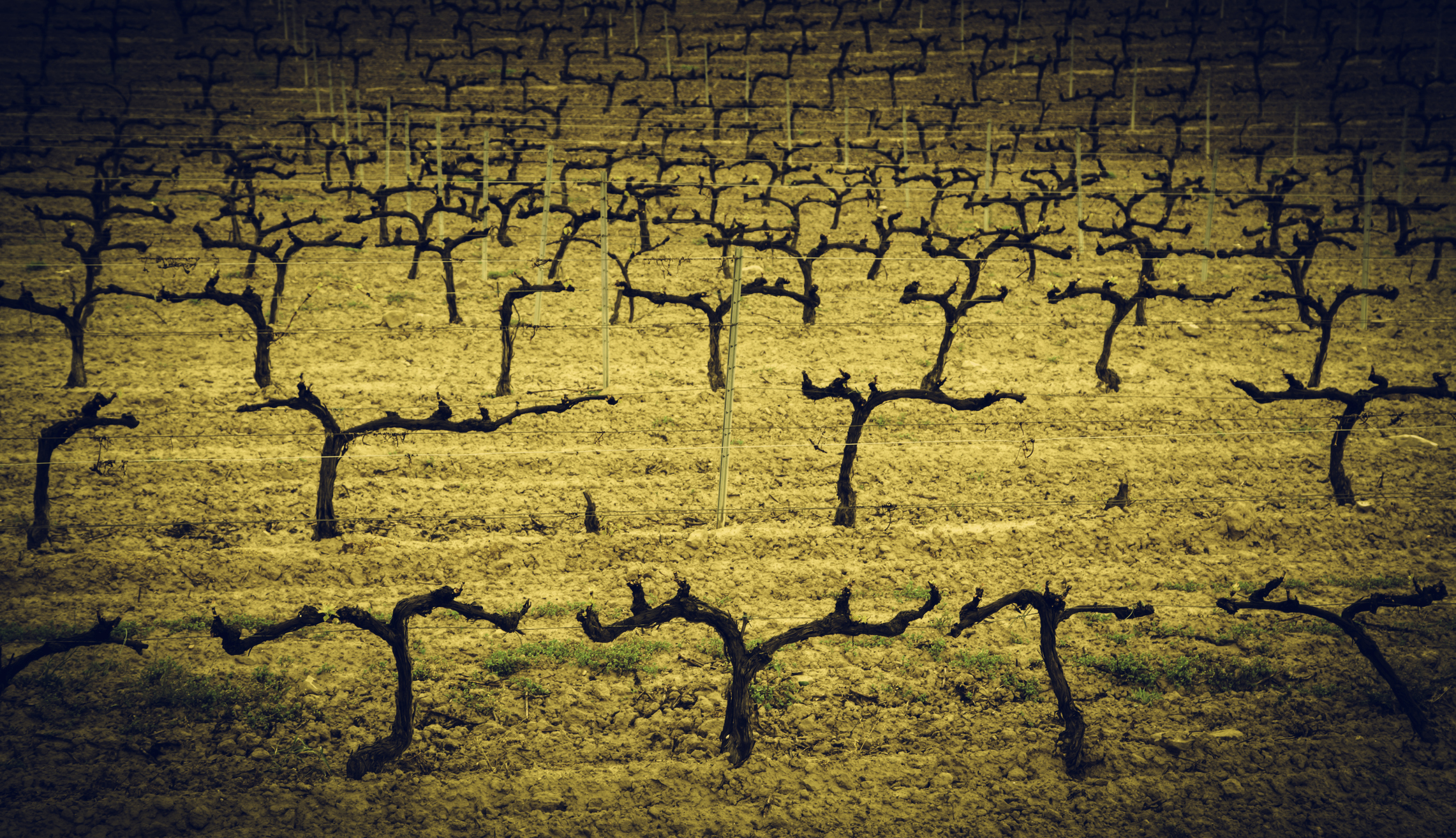 In 2019, a young Spanish engineering undergraduate seeking to pen out her final degree project was prying into the records of the Navarre Viticulture and Enology Station (EVENA, by its Spanish acronym). Sara Valencia, whose interview we will be publishing in brief, was interested in modeling the phenological stages of the vine, i.e., bud break, bloom, or veraison, according to the weather conditions. However, she soon noticed a clear pattern in the station’s dusty datasheets of the last thirty years. It was far removed from the initial goal of her dissertation, but once she joined the dots, the evidence was unavoidable – veraison had steadily happened earlier, and now it was forty days sooner than the initial measurements. Bud break was thirty days ahead too. There, right under her nose, she had direct proof of a phenomenon that many farmers and wineries in Navarre, a region in the North of Spain, have gradually become aware of – global warming.

In the antipodes of Navarre, quite literally, there’s the experience of Justin Jarrett, an Australian winemaker. Jarrett, as quoted by The Guardian, explained that, years ago, he would go on holiday with his family in February and then start the grape harvest on his return. Today, they begin their harvest in January, six weeks earlier. A chillingly similar pattern to the one observed by Sara Valencia in her research.

The witnesses from oenologists and farmers around the world are undeniable – the effects of global warming are a noticeable reality, right now, not some kind of distant and abstract concern.

A significant concern in the winemaking world

In 2019, ProWein, the largest wine show in the world, commissioned a survey from the Geisenheim University. They would have to interview seventeen hundred experts from the wine industry at large, including wineries, coops, and distributors. The outcome was eloquent – 73 percent of the respondents predicted an impact of climate change on their business.

Smaller wineries and coops, with 92 percent and 89 percent, are the members of the wine value chain that are feeling it more acutely. Meanwhile, only 62 percent of wholesalers and 61 percent of retailers would agree with that assessment. One of the reasons that explain this difference is the reduced room for maneuver enjoyed by small producers, both to grow their produce in other regions and to replace their current agricultural systems, regarding the other players in the chain.

In terms of the effects felt in actual viticulture, the most important one for 59 percent of the wineries was the reduced production because of extreme weather conditions such as late frosts or violent storms. Next to that, volatility in output and water scarcity were a concern for 52 percent and 51 percent, respectively. Almost a quarter of respondents had noticed a reduced time window for harvest because of the simultaneous ripening of crops and a higher need for phytosanitary plant protection.

While historic patterns seem to be clear, and the current situation looks gloomy, the projections are also a matter of concern. A few months ago, research made by the University of Alcalá in Spain and led by Ignacio Morales-Castilla made the headlines of the global media. Morales-Castilla and his team had reached sobering conclusions. Their forecast for a worst-case scenario, with temperatures increasing by 4°C, involved the loss of 85 percent of the current usable soil. In Southern countries like Spain or Italy, this figure could even reach 90 percent. Working with a more optimistic scenario, with a 2C increase, the loss of usable soil for vineyards would still amount to more than half the current extension, with a 56 percent loss.

Published in PNAS (Proceedings of the National Academy of Sciences), the study covered eleven grape varieties that showed different levels of sensitivity to the changes in temperatures and rainfall. For instance, varieties such as the Italian ugni blanc could lose up to 76 percent of the current wine growing land, while this figure would fall to 31 percent for the red grenache variety.

Besides the reduced rainfall, the main problem will be the increase in temperatures and the consequent surge in sugar content and wine alcohol. And not only the day temperatures, as the increase in the average night temperatures will hinder the rest cycle of grapevines. 14% wines are becoming the norm in many Spanish wine-producing regions, even further up north. While alcoholic wines have been in fashion over the last decade, with some wineries crossing the 15% threshold, these levels can hamper the expressiveness of the wines and even introduce liquor-like notes.

Fortunately, according to the study carried out by the University of Alcalá, these remarkable figures could be reduced by implementing specific measures. If some sort of adaptation strategy were to be carried out, the loss of wine-growing land could be halved. Not everything would be lost, but the challenge must be urgently addressed. Initiatives such as Wineries for Climate Action (IWCA) show the commitment of some of the largest companies in the sector. Besides the sustainability pledge and the planned reduction of the carbon footprint, there are several measures that can be put into place to face the climate emergency.

Which measures can be adopted?

One of the most immediate consequences of this situation is the increase in irrigation. While in Spain only 22.1 percent of vineyards employed irrigation in 2004, this figure had almost doubled by 2018, reaching 38.6 percent. This amount could be even higher if we factor in the substantial number of non-declared irrigated vineyards.

In areas such as Ribera del Duero in the center of Spain, where most of the vineyards where unirrigated in the late 20th century, the transformation is glaring. Antonio Miranda is the vinicultural director at the Familia Fernández Rivera winemaking group, which comprises renowned brands like Pesquera or Condado de Haza. Miranda points out to the increase in irrigated crops across the whole region and, moreover, he believes that sustainable use of water will become essential for winemakers and farmers in the next years. More irrigation will be needed, while less water will be available.

One of the approaches favored by vine growers is increasing the vegetation index (also known as NDVI) to reduce the exposure of grapes to the sun. That was the aim of Bodegas Habla and their oenologist Eduardo de José, which have favored lower grapevines with increased foliage to produce their white wine in Extremadura, a Western region of Spain that suffers exceptionally high temperatures. The strategy to achieve similar results, however, can change from one area to another. Jesús Astrain, who works as a vinicultural consultant for wineries such as Marco Real in Navarre or Murúa in La Rioja, is working with espalier grapevines, which keep grape clusters above the ground and away from the heat accumulated in the earth.

And, talking about high vines, at Bodegas Torres, one of the Spanish wineries most concerned with climate change, they have been exploring high altitude vineyards. Torres has grown vineyards at the foot of the Pyrenees for several years, as temperatures fall by almost one degree for each one hundred meters gained in altitude. One-thousand-meter-high vineyards are no longer an uncommon sight.

The use of new grape varieties is another solution mentioned in the study carried out by the University of Alcalá on the effects of climate change. For instance, the introduction of Sicilian varieties, accustomed to the punishing Mediterranean heat, was one of the options suggested by the researchers. Another option, instead of resorting to new foreign varieties, is precisely the opposite – using ancient local varieties. This type of grapes, gradually displaced by more productive and profitable varieties, can show higher resistance to extreme weather conditions. This has been one of the strategies embraced by Torres, which has researched for years mostly abandoned local varieties. Some of the most promising ones are forcada, pirene, moneu, gonfaus, and querol.

But this research on local varieties pales in comparison to the research carried out by Manuel del Rincón in his vineyard in Ribera del Duero. Rincón, an engineer who works as a consultant for wineries like Pago de Carraovejas and who owns the Marta & Maté winery, is researching hundreds of traditional varieties within an EU-funded project. Many of them were on the brink of extinction, but perhaps they hold the key to the survival of viniculture in the region in the face of global warming.

As mentioned earlier, the excess of alcohol in fermentation because of the increasing amount of sugars is one of the negative consequences of the rise in temperatures. Some measures can also be implemented outside of the vineyard to address this situation. One of them is a dealcoholization process through reverse osmosis that some oenologists are already testing.

Finally, the new technologies are bound to become invaluable allies in the adaptation to climate change. One of the keys will be the precise diagnostic of the situation in any given region and the possibility of predicting future scenarios. In that respect, artificial intelligence and big data will provide powerful tools to farmers and wineries.

Even with all these tools and measures, it’s very likely that climate change will render useless many of the grape growing lands in the following decades. Nevertheless, while the situation will be tough, anticipating the evolution of the farming soils will allow all players to make rational decisions and carry out smoother transitions to alternative productive models.

The winners of global warming

Although most of the wine-producing countries will suffer losses with the new situation, there are some regions where the rise in temperatures will enable the production of high-quality wines. An example of this would be colder and damper areas like Great Britain. While this country has produced wine since the times of the Romans and, in fact, visitors can still buy grapes from centenarian grapevines in Hampton Court summer palace, not many would call Britain the epitome of a fine wine producer.

Maybe 250 acres wouldn’t seem like a vast estate compared to other vineyards in Spain, France or Chile, but the vineyards in Denbie’s Wine Estate are the largest in the United Kingdom. Founded in 1986, this winery has gradually improved the quality of its output. And, although massive fans have been used right until recent years to fight aggressive frosts, the warmer temperatures recorded in the last decade have benefited their wines. In 2014 they already enjoyed a record-breaking 320-ton harvest. Then, in 2017 they reported the earliest harvest on record in their thirty-year history. Of course, these facts have influenced the quality of their wines. But not in a negative way.

The sparkling wines they’ve produced over the last decade, as well as some of their noble rot dessert wines, have earned them prestigious prizes like a bunch of Decanter World Awards medals. Who knows, maybe countries like the United Kingdom or even Sweden will become the new Bordeaux of the coming decades.